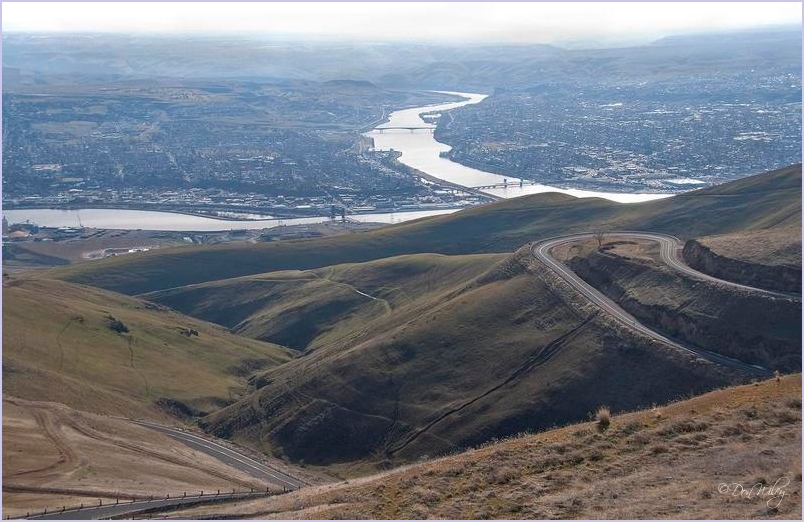 The Snake River in the center of the picture is located at the confluence of the Snake River and Clearwater Rivers. Lewiston, Idaho is on the left; Clarkston, Washington on the right. Because of dams (and their locks) on the Snake and Columbia River, Lewiston is reachable by some ocean-going vessels. The Port of Lewiston (Idaho's only seaport) has the distinction of being the farthest inland port east of the West Coast. The viewpoint is 1,000 feet (30,480c) higher than the rivers below.

This is quite a stunning view Don, I love how you have captured the hills with their switchback roads and how the light reacts upon them and then the city in the distance which then seems to blend into the sky

A cool view from above!

Image and narrative sends the imagination on quite a journey here . . an ace presentation, Don.

Wonderful layered imagery in this landscape

I like this image and your narrative, Don. You're looking south here and the change of terrain is fascinating. I had to check to see if this is the same Snake River we saw in Jackson, WY ... and sure enough, it is.

Wonderful perspective. I like the excellent composition with elements such as the valley of hills, the S-shaped river, the big curved road and the misty view in the distance. It's a superb shot.

Gorgeous shot of the panoramic view. Geographical features peculiar to the district, such as the Snake River, are perfectly captured. Excellent perspecive and composition.

I like this landscape, especially the interplay of sinuous shapes of the river and the road.

A fine shot with the hills in the foreground.

Wow! What a view! Very interesting information! Never knew that about Lewiston.

That is a gorgeous view!

What a grand view! And what a road to travel down...

That is pretty impressive Don!

Nice dusty browns and grays. I like the folds in the earth and the general incline of the landscape.

A really nice view of the snake-like curving of the river. Great vantage point.

A beautiful view of the valley and the river flowing down. Excellent point of view. Great shot and interesting narration. :)

wonderful pano that allows us to get a feeling for the dimensions of the land ...