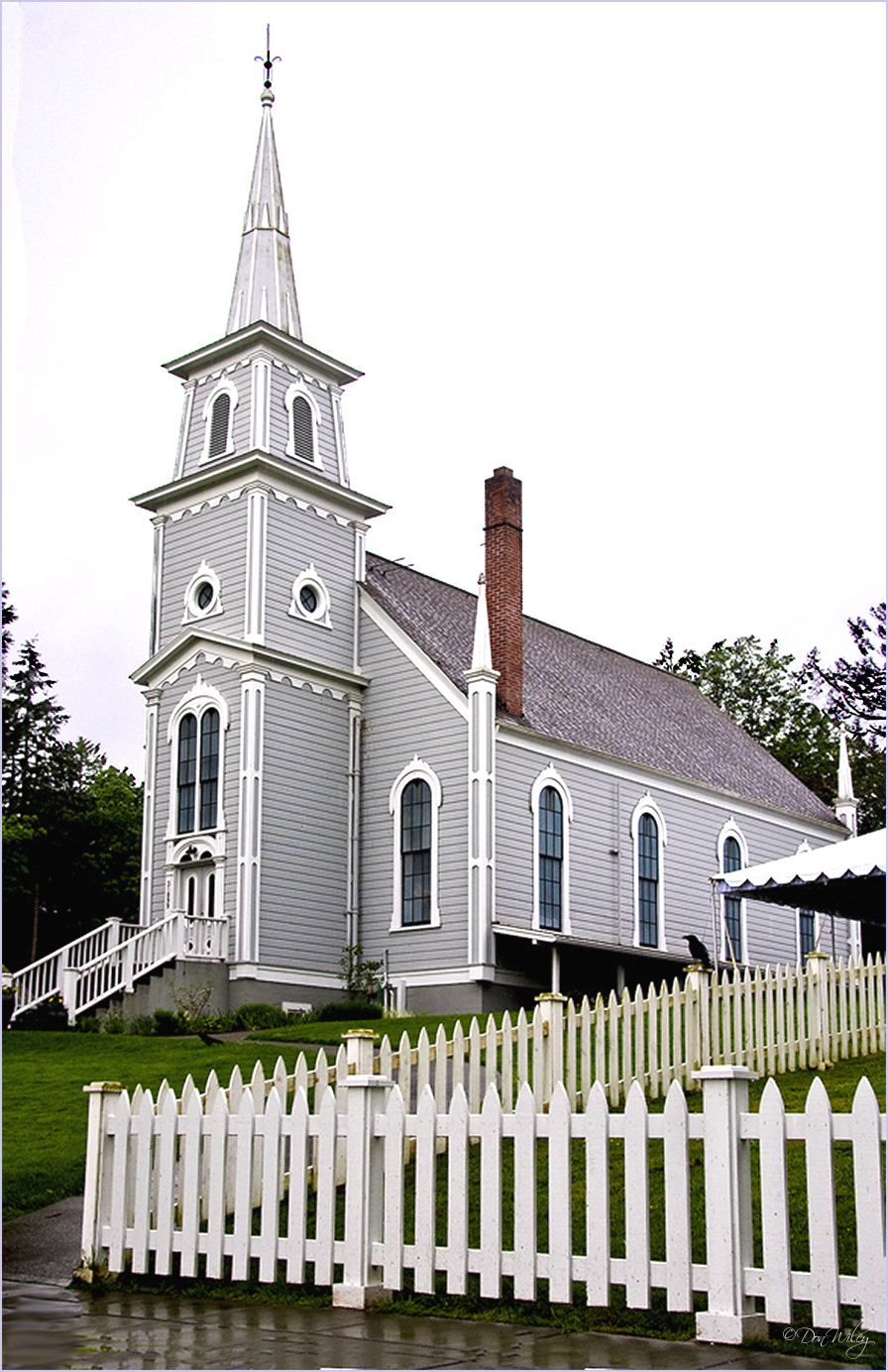 Posted by Don (Spokane, United States) on 27 April 2013 in Architecture.

Posted to support Sally Saw, a new meme. Check it out! I liked the tall, blue windows and clean lines of this church. "Port Gamble is an unincorporated community on Gamble Bay near the entrance to Hood Canal west of Seattle. The Port Gamble Historic District is a U.S. National Historic Landmark. The population was 916 at the 2010 census.The community of Port Gamble has a wide range of shops from antiques to a tea shop to an old-fashioned general store. It is a popular tourist destination, due to its location near Bremerton, Port Townsend, Bainbridge Island, and Seattle and its downtown." Wikipedia

Nicely framed Don and the crow is the finishing touch

what a great place. love the fence too. great find. so decorative. ( :

I have been to that area just once, but misused seeing this lovely church. Nice shot.

that is beautiful! i know beth would love it if you linked in with her and sally's meme later today! :)

@TexWisGirl: I'm planning on that. Thanks for the reminder.

The diagonal fence line is the perfect lead into the vertical shot.
Beautiful, Don!

Nice simplicity. I like wood church of your country Don

Lovely image- I like the rainy atmosphere and the point of view.

I love this vintage church! Your framing with the fence is quite nice Don.
A lovely church!

What a beautiful church! I love the architecture and the color! Wonderful POV!

A pretty shot of this old church. I like the gray walls and blue windows.

Great shot of this perfectly maintained and utterly charming church.

i completely forgot to say Thank You Don for linking up to our new Church Meme - so exciting. have a great weekend. big big hugs. ( :

Pretty. And interesting meme, I might have to join in as I love church shots.

Love this church and I like how the picket fence frames it and leads you into the photo.

Great looking church and good composition with the fence and the railing - and of course, the crow. Is this a re-post? It seems familiar.

Appreciate the rather elaborate trim and ornamentation on this simple church. And good eye to add the "crow" interest as well.

terrific graphics. i love that church. i used to go by it all of the time when we lived in sequim

Very pretty. I love the blue windows and the white trim.

The hierarchy here is brilliant and against that white sky it's pretty interesting and superb!

A pretty little church-on-a-hill. I like the tall steeple/entrance, with added height from sitting way up high. I don't think I've ever seen a chimney on a church before...or at least I haven't noticed one.
AN EXCELLENT CAPTURE.

Lovely building. The gray is nice and the details just make it.

very well composed with the fence in the foreground

That is a wonderful church and shot, Don! From the beautiful spire, to the coordinating building corners, to the white picket fence next door. Thanks for participating this week!

Beautiful old church and pov. I really like those simple blue stain glass. Is that a real raven or crow on the post? Must be, what an interesting foil, or counterpoint.

love angle and pov here, with the very appealing combination of fence and steeple !

This is a wonderful shot. Such a beautiful church. The crow is a bonus. I even wondered if he was real.