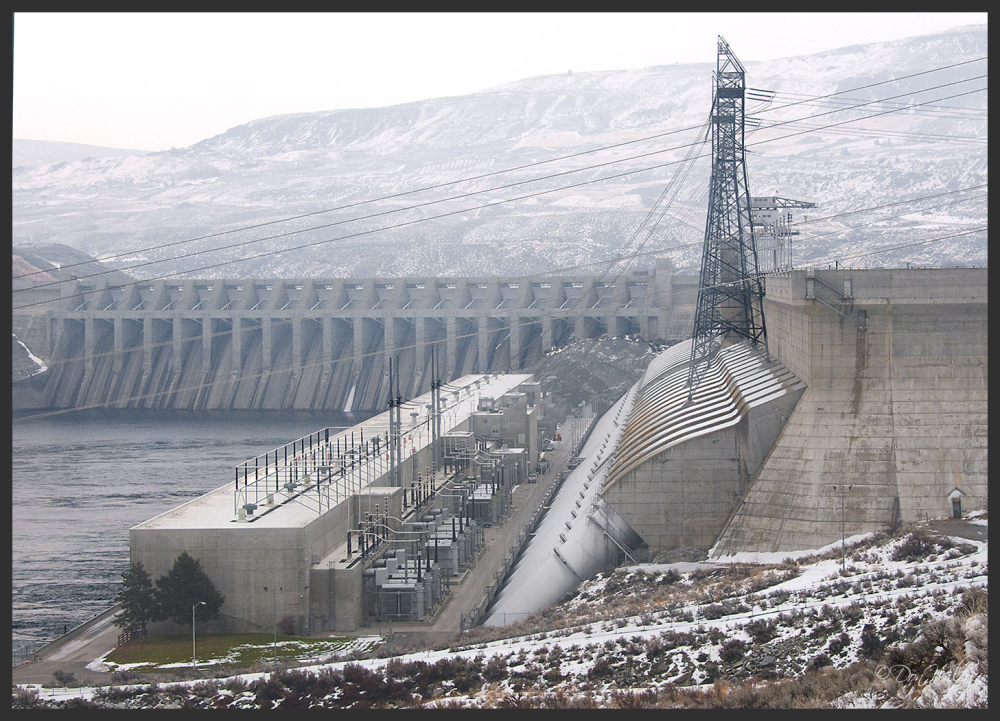 "The Chief Joseph Dam is a concrete gravity dam on the Columbia River, 2.4 km (1.5 mi) upriver from Bridgeport, Washington, USA." The dam was renamed the Chief Joseph Dam in honor of the Nez Perce chief who spent his last years in exile on the Colville Indian Reservation. "Eleven additional turbines were installed between 1973 and 1979, and the dam and lake were raised 3 m (10 ft), boosting the capacity to 2,620 MW, making Chief Joseph Dam the second largest hydroelectric power producer in the United States."Wikipedia

It looks massive...bet it looks even bigger in person.

These dams are such wonders of work. Thanks for reminding us of their value.

The scale and function of dams tends to make them part of the landscape rather than something sitting in it. A fine example of that right here.

Fantastic shot that captures the grand scale of this project.

It looks like something from a Star Wars movie that will get up and walk.

what a massive structure!

Phew! What an impressive, massive installation of man's harnessing of power. It gives me a slight twang in my center. To name it Chief Joseph is very arresting. :-D I tilted my screen to see the depth of color. Powerful shot Don.

What a view ! Thank you Don.

This is a wonderful perspective of the dam; you had a great view and took a great shot!
Have a nice weekend!

Impressive dam building!
With a frosty morning all special.
Super view on the dam

How do you get that special light in your pix, don? It's fantastic. And, is that Luke there on the right, to give us a sense of scale?

Quite an impressive structure in a beautiful landscape, all of which you have captured and shared so very well.

That's a lot of juice from a nice clean source of power. I love our hydro-power here. It makes all the rain, and snow for some, worthwhile.

Something about dams kinda fascinates/terrifies me, thinking of them holding that massive amount of water back.

that's a fine shot of this massive dam!

Interesting subject ! I like the composition, graphic, of this image.