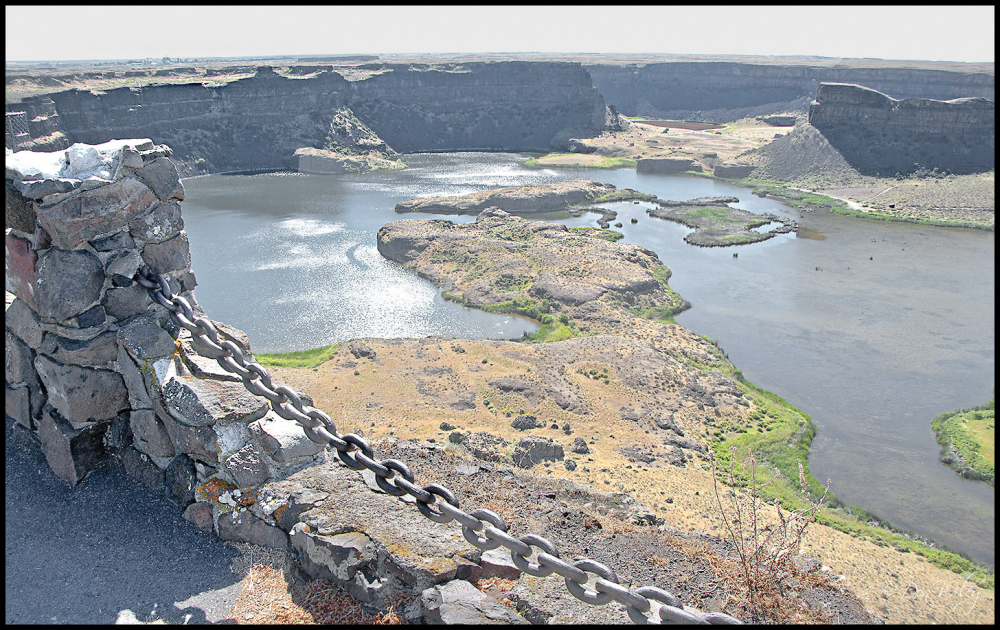 Dry Falls is a 3.5 mile long scalloped precipice in central Washington, ten times the size of Niagara, Dry Falls is thought to be the greatest known waterfall that ever existed. According to the current geological model, catastrophic flooding channeled water at 65 miles per hour through the Upper Grand Coulee and over this 400-foot (120 m) rock face at the end of the last ice age.

If you want to know more: Dry Falls is part of the channeled Scablands which are a unique geological erosion feature created by the cataclysmic Missouila Floods that swept periodically across eastern Washington and down the Columbia River Plateau during the Pleistocene epoch.

River valleys formed by erosion normally have a 'V' cross section, and glaciers leave a 'U' cross section. The Channeled Scablands have a rectangular cross section and are spread over immense areas of eastern Washington. They exhibit a unique drainage pattern that appears to have an entrance in the northeast and an exit in the southwest.

Love it. What a view and what a history. Can you imagine what this looked like in the prime of its powers? Wow.

I would like to visit this place! Very impressive!

Superb shot, and the detail in your narrative is so fascinating. Even the phrase "Scablands" is so evocative of this unique geology

What a beautiful unusual image and frame with the hard chain in the foreground, yet blending with it's old and crumbly rocky wall, and the green edges around the water. I'm wondering if my monitor is too bright, or if this image was strongly sun lit. I tilted my screen to give it more contrast.

I enjoyed the history lesson as well as the photograph. I just had to read about something called "Scablands." I like your framing that includes the man-made wall and chain as foreground to the wide open spaces.

Very cool. I once saw a documentary about glacial erosion that included that.

What a beautiful and unique landscape.

An excellent choice of frame Don and a beautiful place.

That would've been something to see with water roaring over the huge fall. A fine shot of this interesting place.

A visually interesting place. Love the painterly treatment you've given it, don! :O)

really cool formation! at first it looked like an aerial shot!

fantastic pov and scenery and a most interesting geological history of the place! fascinating!

hey dude
man, thats awesome.. im kinda reminded of the opening crash scene from the original Planet Of The Apes...

fantastic view and composition, i like the chain in the foreground

I've never heard of that place & that's a shame, because it sounds like it deserves more attention... very interesting, Don

Don't you wonder what the first pioneers thought when they saw places like this? What a fantastic view.

that's one heck of a view you got here.. sure looks interesting.. great catch.. :)