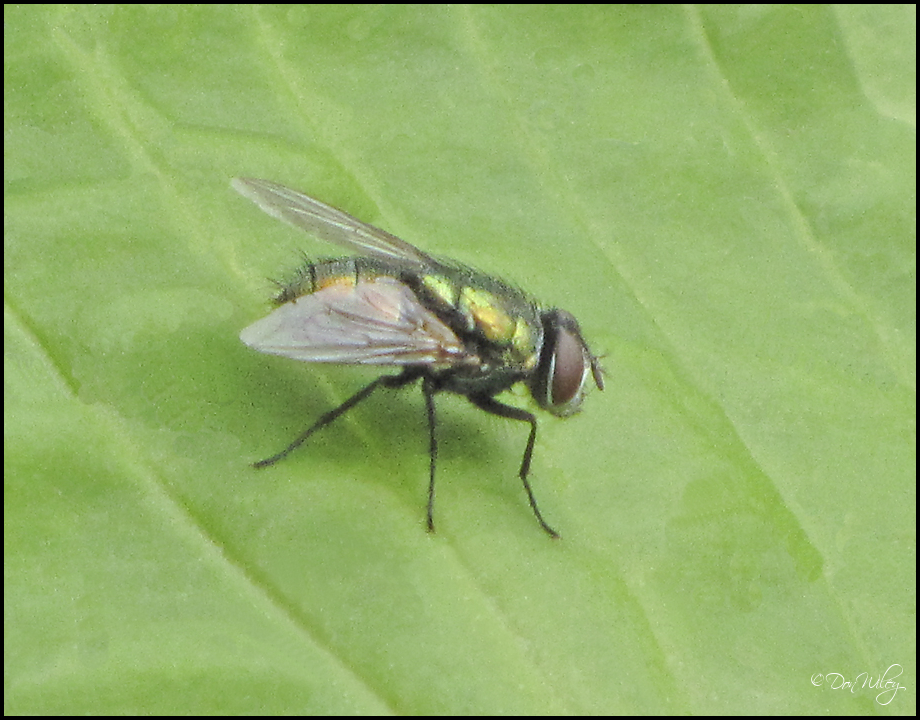 Since I'm house bound right now, I was sitting at a window with camera in hand looking for a picture. A fly landed on the Hosta plant directly outside...I opened the window and got one shot with my longest zoom. The little point and shoot focused wherever it wanted to, but not as well and I would have liked. Being desperate for a new shot, I processed it anyway. It's not of the brilliant, detailed imagery usually seen with this kind of shot, but it was the best I could do. The fly did not return.

That iridescent green body is nicely captured. The pesky critter posed nicely for you.

Great zoom! I think it turned out great!

You caught the wonderful metallic iridescence though Don

nice shiny back he has

Hey pal, don't really want to see the detail of those critters anyway. Thanks for the nice impressionist view. :-)

For me, this didn't need a super crisp detail because it takes on a painterly effect like this and is a nice green on green motif. I'm also glad that you are keeping your friendly camera nearby as you recuperate!

A little noisy, but a worthy shot Don. The colors on the creatures body came out quite nice.

We takes 'em where we finds 'em..... and you caught the lovely iridescent color !! :-)
You could enhance that 'painterly effect' even further by adding more blur.

Revoltin' critter, you got rid of the camera shy beast anyway.

Great use of time and available talent. Haha. That fly is now world-famous, thanks to you Don. And a Happy Father's Day to you, buddy.

one never lacks for stuff to shoot. good for you

A pretty good shot for a point & shoot, I think. The little P&S we have would not do near this good.