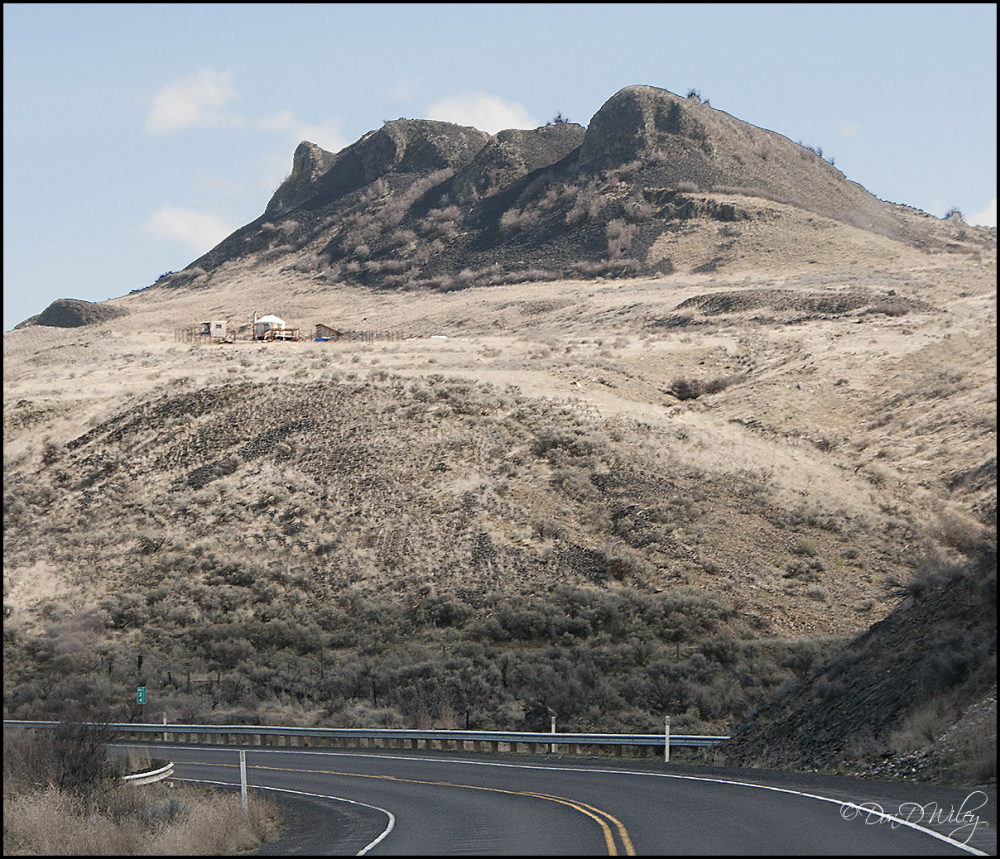 Near Grand Coulee and overlooking the reservoir of the Grand Coulee Dam, I noticed this house in an unlikely, high isolated place on this basalt mountain side. I saw no method of driving to this house, but perhaps it was just not visible from my location on the road. A drive-by shot as we rounded this curve. The Columbia River Basalt Group is a large igneous province that lies across parts of the U.S. states of Washington, Oregon, and Idaho. During late Miocene and early Pliocene epochs, one of the largest flood basalts ever to appear on the Earth's surface engulfed about 163,700 km² (63,000 mile²) of the Pacific Northwest

There's a man who likes his solitude(Maybe a survivorist as well?)

hat is around the curve you wonder

The life in the desert...

That texture on the mountain is spectacular

Not likely to be pestered by callers up there - looks ideal to me !

Great view he must have !! great shot!

I am just imaging the heat in the summer. Nary a tree in sight and one probably wouldn't grow there.
Home is where you hang your hat. MB

The kind of road i like to follow, a little bit scary, and mostly grandiose. Fine tones of the hill captured here (almost a monochrome).

Very VERY nice! That sweeping arc of roadway is perfect for anchoring the strength of the rising landscape.

It's wonderful. Seems like you're always on the road. This has a great sense of scale!

With the highway in the foreground, it's kind of a comment on 2 different times, very cool.

I bet his postman is pretty fit!

What a majestic landscape. Love how you've framed this with the road in the foreground.

Interesting geological history. I will need to look up flood basalt. ;) It might be obvious from the words, though. I suspect the person (s) up there have an interesting lifestyle. There might be a dirt track road which is out of view and leading to another road to another ...

Without the road this just like a scene from an old western, excellent view and image.

I always wonder how deep the well is when I see a place like this up on a mountain. They must have to go deep to get water.

You really do pour out the information. Very cool shot.

another brilliant frame where everything works! a very strange scene indeed!

Well composed, with the curve in the road echoing the hillside and both leading into the frame.

It certainly does look lonely...and oh so different from today's photo!