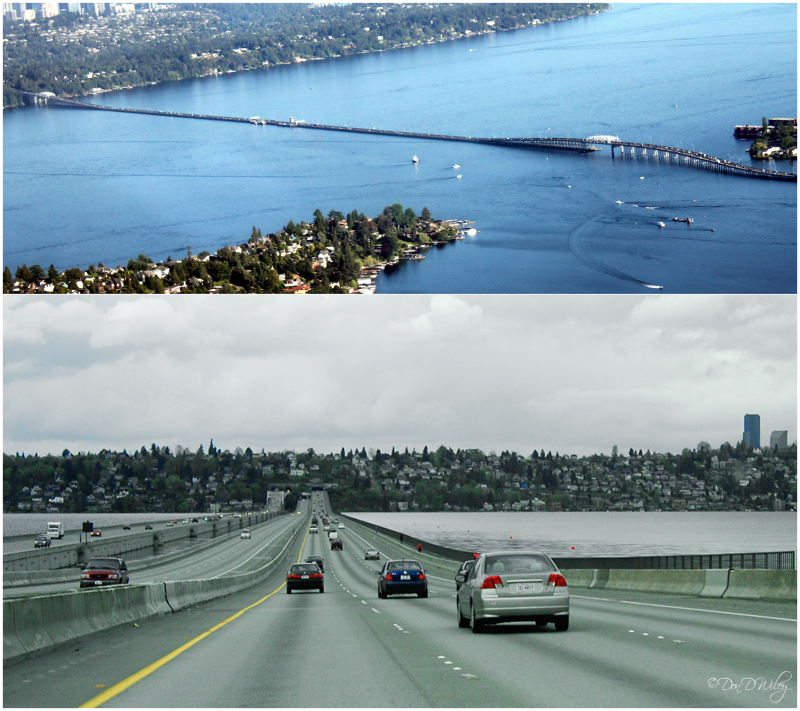 Posted by Don (Spokane, United States) on 18 November 2010 in Transportation.

"The Evergreen Point Floating Bridge (top picture), is the longest floating bridge on Earth at 7,500 feet (2,300 m). The bridge was built as a four-lane toll bridge to provide easy access from Seattle to Eastside communities. Today the bridge is near the end of its useful life, according to the state Department of Transportation. In 1997, Myint Lwin, WSDOT's chief bridge engineer at that time, said that even with repairs, the bridge could be expected to last only about twenty more years (until 2017). The bridge must be closed in high winds, and it is at risk of collapse in an earthquake. Due to the weight of various reinforcements over the years, the bridge currently rides about a foot lower in the water than it did originally. The DOT is working on replacing the aging bridge with a new span of six lanes."Wiki

"Lacey V. Murrow Memorial Bridge (bottom picture) is a floating bridge that carries the eastbound lanes of Interstate 90 across Lake Washington from Seattle to Mercer Island, Washington. It is the second longest floating bridge on Earth at 6,620 ft (2,020 m)."Wiki The top picture is a Wikipedia picture in the public domain.

what an amazing structure

Very nice picture and thank you for sharing all this information !

Good morning Don,
The collage I like very well. We have, in one glance the entire list. In both pictures the view including color and detail, more than excellent. It is very impressive and informative. For that I give you 5 stars *****and more. I hope that no harm is done to this magnificent bridge. It would be sad and unthinkable. Thank you for the beautiful picture. Today, the outside view to the Cologne Cathedral is very hazy. The seven mountains are not visible. In the distance covered with the fog the view. The outside temperature is 9.3 degrees Celsius plus. At that moment the sun comes out. It could be a beautiful day. More on the weekend. We wish you a nice sunny day and all the best including your family and friends. Dear greetings Christel and Detlev.
Take care, my friend.

Don, very interesting information and photos -- I wasn't aware of either of these bridges. With the highway infrastructure crumbling all around us I wonder where all that money is going to come from to do the repairs or replacements? Especially since the government is already so far in debt.

I learn something new every say . . never knew about these. Seems a good idea for those situations, too, although I get a 'sinking feeling' from your shot . . hee hee

Very interesting. Thank you so much for sharing!

I had never heard of floating bridges before. Nice diptych of two viewpoints giving us an idea about how it works.

What an amazing bridge, I to hadnt heard of floating bridges so found this quite interesting to read

The top photo is a stunning landscape/documentary style shot that includes lovely colors and lines. The bottom one seems to be just the rear ends of cars with some water on the side and a city in the distance; but I guess it is a documentaion of the bridge.

@Harry: I was thinking those interested in floating bridges might wonder how it feels to cross a bridge so close to the water. I agree the shot is rather uninspired and ordinary! :-)

I didn't even know there was such a thing as a floating bridge & ya'll have 2 & the longest in the world, too! WoW! So Washington has the franchise on the floating bridge business! heheheee

I love the second fram
Exactly i like take that

SOUL AFLAME from The bosom of Mother Nature, United Kingdom

Fascinating background information to accompany these fine images of the floating bridges, Don.

"Floating bridges" Wow, I never knew that they even existed! I wonder what stops in bowing in high tidal conditions or a high wind. Maybe that's why its got a limited lifetime?

@CElliottUK: These are both on Lake Washington which is a fresh water lake - not tides. High wind shuts the north bridge down periodically.

First time I have seen such a bridge. What a construction.

I bet they get used until they literally sink. Nice images, Don.

Interesting images don, have to admit I never knew about this floating bridge and I was in Seattle. However, it was many years ago. Excellent view from both angles. Fascinating captures.

Wow, that's the longest "pontoon" I've ever seen. ;)
One thing I don't quite understand: how could they shut the bridge in the unlikely event of earthquake?
We can predict and measure wind speed; we can't predict where's earthquake is going to strike.

Wow! both over a mile long....interesting post. If I can remember will look up more about them when I have time.

floating?! wow.. now there's something you don't see often. :D nice work capturing it from up above too.. :)

This is so cool. I've never heard of these being used for civilian purposes. The only one's I'm familiar with are the bridges used by the military for landings.

Made it OK. Miss everyone already.

Great shots ! Well presented...
Love the composition and colours in the first one...Nice point of view in the second picture

Floating bridges. I had not idea. Nice captures.

I'd love to drive over one of them.

Interesting. I had no idea.