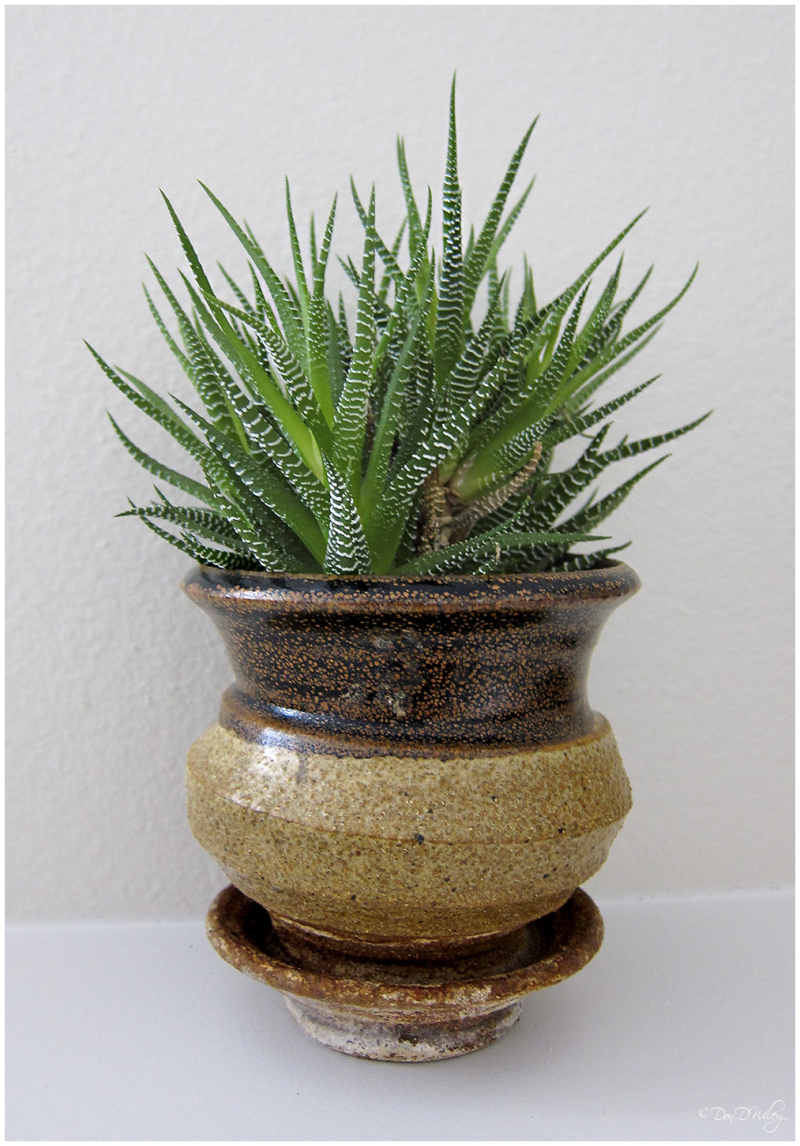 I noticed this plant against the white wall and liked the clean look of the image. The friend didn't know what it was, but a search in Wikipedia appears to identify it as a form of Aloe Vera. This plant is part of a species of succulent plant that probably originated in the southern half of the Arabian peninsula, Northern Africa, the Canary islands and Cape Verde. Aloe vera is valued for its medicinal qualities.

Excellent. The white striations in the plant are great against the white background.

A lovely plant complemented by your great research!

they say it's a good remedy for dandruff too.. :D i like how the leaves look like green fire.. :)

Seems we both have the same topic today,sharp plants:)
This one has great patterns!

That's beautifully done and it suits its pot perfectly

The slight texture on the wall amplify the white specks on the aloe and the grainy look of the glaze on the vase. Nice simple shot.

Lots of nice texture. I like the simplicity too.

nice capture of this potted plant, nice mixture of colors and textures.

Your photo is almost a Japanese still life. The pot contrasts nicely with the plant.

Great shot...White dotted lines on the green leaves and the texture of the porcelain(?) pot are very nice..

The MaJor from TM HooD, Iran

Beautiful plant. I can never get this variety to thrive.

Oh I have one like this. They are rather nice with their white lines.

We had one of these years ago, it's a very strong plant. Nice shot here Don, looks good against the clean white background.

I have a huge Aloe plant at school and they are beautiful plants because of their colorful leaves. I love this earthy shot!

Pretty. We have a lot of aloe here in AZ.

I'm not a friend of aloe vera...but this plant looks very elegant here because of the POT! Wonderful earthly colours and glaze on ii!