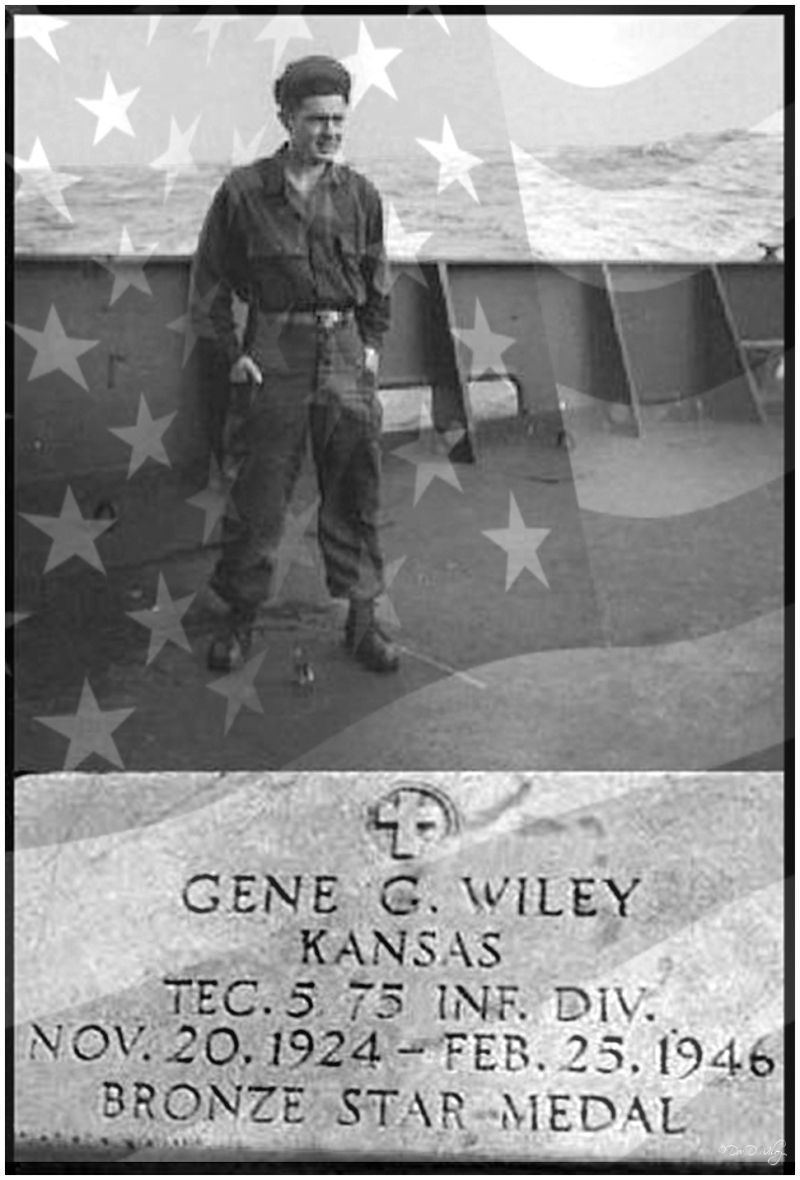 This day is a special time to remember my brother, Gene Galen Wiley, who was drafted and served his country as a medical technician in World War II.

He’s pictured here on his way to Europe in 1944. After the war, Gene was rerturned before his company and and given an early discharge. We wondered why. He married his waiting sweetheart and started working at a local newpaper. One month later, he a developed a an acute illness and died four days later. Without explanation, the government declared his death a war related casualty.

Gene was my only brother.

What a nice hommage to your brother Gene Don! A sad story indeed.
All the best

he died so young
nice tribute

How terrible to be left with an unanswered question hanging over him like that. The tribute is evocatively done

Good morning Don,
it is a very sad story and it saddens me. I can understand very well how you feel, a person close to you, and only brother you love, have lost so young by death. Hereby, I would like to express my condolences. In my mind I'm with you. I do like your picture. Thanks for the mail. Answer coming soon. I wish you all the best. Dear greetings Christel

Don please accept my sincere sympathies for your great loss...this is a lovely tribute to the memory of your wonderful brother...may his soul rest in peace!

So perfect for today. So sad..

A wonderful shot of and tribute to your bother, may he and everyone who has lost there life in service of there country never be forgotten

that is quite sad.. a great tribute to him too..

Wonderful shot,and a wonderful tribute to your brother..with all my respects Don.

Beautiful tribute to your brother, Don. I'm sure this has been something that you carry around with you always. Peace be with you.

Very strange. It sounds as if the government knew he'd been exposed to something dangerous, but we'll never know. Such a wonderful image you have here.

fine tribute to the soldiers.

Don, very strange and interesting story about your brother Gene. A very nice tribute for him on this Memorial Day.

Thanks to your brother for his service and I am sorry for your loss. A lot of wonderful men served and many were lost during and after. I did a memorial image similarly for my father, a Korean Vet. What a wonderful tribute you have made here.

Wonderful image to pay tribute to your brother on Memorial Day

Oh, that's very sad, I'm sorry. What a lovely tribute to him. My dad was in WWII also.

A very fitting tribute to your brother, Don.

Oh, I am so sorry for your loss...and he was so young. I cannot imagine losing a sibling that was that young.

Moving Don. I wonder why no more information was given, as obviously some responsibility was acknowledged.