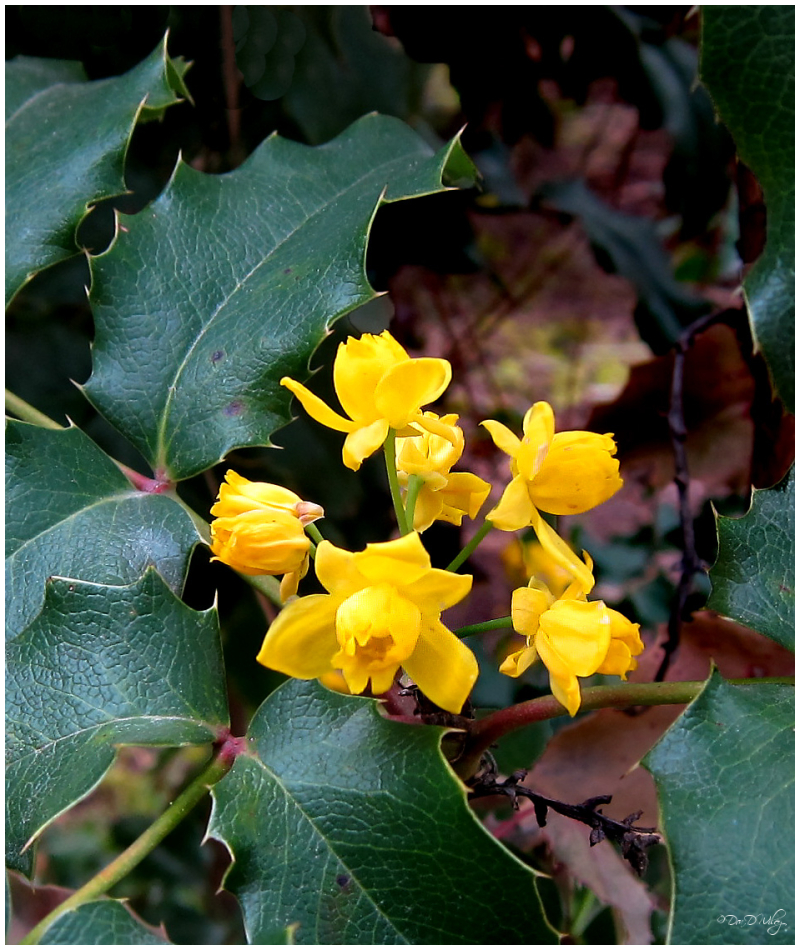 A friend upon looking at my holly plants with the yellow flowers...ventured the opinion that what I thought was holly... was actually Oregon grape. Wikipedia seems to verify that opinion. The Oregon-grape is not closely related to grapes, but gets its name from the purple clusters of berries whose color and slightly dusted appearance are reminiscent of grapes. Its leathery leaves resemble holly and the stems and twigs have a thickened, corky appearance. The flowers, borne in late spring, are an attractive yellow. As the leaves of Oregon-grape are holly-like and resist wilting, the foliage is sometimes used by florists. Now I'm waiting to see the grape-like berries in the fall.

A great discovery by your friend!

Well thankfully that explains why I'd never seen bright yellow blooms such as these on any Holly plants around here. :-) Nice shot!

I love the color and the details in the thorny leaves!

Great framing made it so attractive

Today at coffee two friends insisted that this is not Oregon Grape. The mystery continues! :-)

Beautiful shot.........Wonder how you can get a "definitive" answer on the identity of this plant??? Will stay tuned for the ongoing query....

BEautiful colors and processing :)) Yellow is not so easy to process , but here it looks great !

Well whatever it is called it is so beautifully captured, glorious yellows

Pretty! It sure looks like the pic of Oregon grape that's on Wikipedia. The flowers look the same, the leaves are shaped the same. Your leaves look darker but that could be the lighting on one of the photos. I'm a terrible plant/tree/flower identifier but I've actually learned a lot by blogging. I hope you solve the mystery.

I didn't know holly had such beautiful yellow flowers. thanks for sharing

No kidding?...It is very beautiful just the same! Love the yellow flowers. My holly has small leaves. Will have to show you.

Great colour, depth and detail, digicams are so good at this kind of photography.

that's a nice bit of trivia there.. very nice capture too.. :)

ah, glad that you've figured it out. I was confused before. :)

Nice shot Don ! The texture and patterns on the leaves have been captured beautifully. Lovely colors !