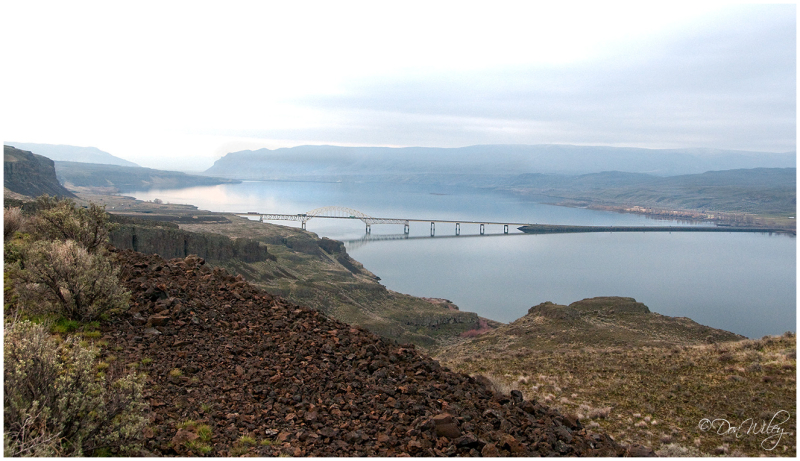 Wanapum Dam, in the distance, is a hydroelectric project located on the Columbia River downstream (south) from Vantage, Washington where Interstate 90 crosses the Columbia. This is the principal freeway crossing the state of Washington. The area around Vantage has been occupied by the Wanapum Native Americans since prehistory. A number of well-preserved rock-paintings have been found on the cliff walls. They also used the abundant petrified wood in the area for arrowheads and other tools. The site where these petroglyphs were found was inundated by the rising waters behind Wanapum Dam in the 1960s. About 60 of the more than 300 carvings were cut from the basalt cliff face and saved.[3] The site is one of the most unusual fossil forests in the world, and was designated a National Natural Landmark by the National Park Service in 1965.

I nice clear day to capture this!

This is a wonderful composition. What a view! I really like the colours layers.

Seems such a shame to lose all those other petroglyphs to the rising water. In cases like this I often wonder if we've not lost sight of what's more important. Lovely image.

Must be an amazing place - it certainly looks like it! And all that history. Makes you stop and think...

What a fascinating bridge! You picked a wonderful place to capture this. Such a vast area of beauty.

I like the distinct layers of sky, distant hills and rocky foreground. An unusual bridge that seems to start out a causeway and change its mind half way.

Very nice capture, Don. Must say that I don't miss the east side of the Cascades part of I-90.

wow..that is a great scene !

Your water shots are my favourite. This is a super shot of nature's layers.

So beautiful!!! One of your best photos!

What a wonderful vantage point for this shot, the sloping bridge iis so interesting, not sure I have ever seen one at an angle like that

I really like the layers through the photo with the bridge cutting through them.

The design of the bridge fits beautifully the landscape. Great composition structured by a Z!

Excellent capture of this amazing architectural wonder, like a scene from another time. Love the vast far away view that really gives the ominous scale and depth to this bridge and dam.

man, that's one sweet place you shot this from.. beautiful shot.. :D

Interesting bridge and landscape. Looks like a great place to get photos and see a lot of history.

I like all the different colored layers. A great composition too.