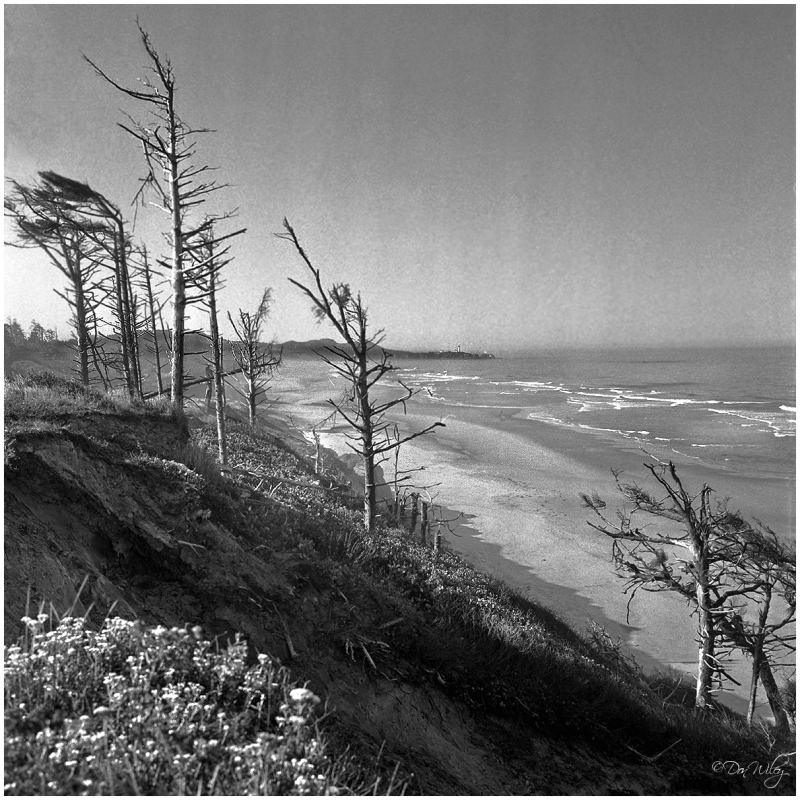 he Yaquina Head Light, also known early in its existence as the Cape Foulweather Lighthouse, is a lighthouse on the Oregon Coast of the United States. It is located in Lincoln County, near the mouth of the Yaquina River near Newport at Yaquina Head. The tower stands 93 feet (28.3 meters) tall, and is the tallest lighthouse in Oregon. Yaquina Head Light was automated in 1966 and is currently an active aid to navigation. The lighthouse still uses its original 1868 French-made Fixed Fresnel lens.
This was a problem negative to scan and process. It had a significant grain and uneven development resulting in lack of smoothness in the sky. I liked the stark look of the trees and decided to post it despite its shortcomings.

The distant lighthouse is complimented by beautiful scenery!

That is the visual definition of "desolate." Wow, kinda eerie.

You did well posting it Don. I like the light here! Thanks for your informative words.

It would be easy to think this was from prehistoric times.... such an empty place, but a great view along the coast.

Looks a lovely place Don. Nicely composed and I agree about the trees, they are beautiful even in death

I like this. The grain in the sky could almost be the salt and weather blasting those exposed trees.

Don, I'm glad you decided to post this one, even with the perceived problems. I think the pluses far out weight the minuses in this case.

Wonderful view of this wind-swept coast. Excellent tonal range. The grain above the ocean seems a bit unevenly distributed - do you think it is an effect of banding in the scan?

The same lens from 1868? My goodness, they really seriously don't make things like they used to. WoW!

SOUL AFLAME from The bosom of Mother Nature, United Kingdom

Those trees have a life all of their own, dominating the scenery as they watch over the tides. A fabulous shot, Don

This is still a beautiful image . Everything looks fine, but I do not like so much grain on a sky ! Other tahn that photo is great !

Wonderful. It has a marvelous vintage look.

Great composition! I really like the wind bends the trees, the image in b & w more sense of the cold winter wind

beautiful and dramatic and expressive

Very dramatic. Look like it is after the great storm. Well captured!

I don't think this has any shortcomings at all...I would not have anything about it different.

This is very beautiful shot. The light house way off in the distance looks great with the trees and coastline in the foreground. I would call this a classic image. Bravo!

i think this is the perfect time to shoot this scene because of the leafless trees.. very nice scenery.. :D

this is a beautiful shot, although it has the look of tragedy in it. I actually think the uneven sky in the back adds to the photo. It makes me feel as though the storm has just passed. :)

excellent, Don. The grain does fit the starkness.

The coastline is gorgeous. Seems in contrast to the barren trees.

those trees have a wonderful, dramatic feel to them...a great capture.

The look of those trees are like ones found on top of high mountaintops.....just from trying to live through harsh winters. And here are the same looking trees along a beach.......looks very strange to me.....but it gives me an odd feeling.....I like it.

i see the lighthouse into the distance, terrific compo in mono.

Always amazed at your B&Ws, Don.

Don, This is one of the Nicest shots Iv seen since joining this site, a beautiful works.. Just Love it, you ever think about flipping this Image??