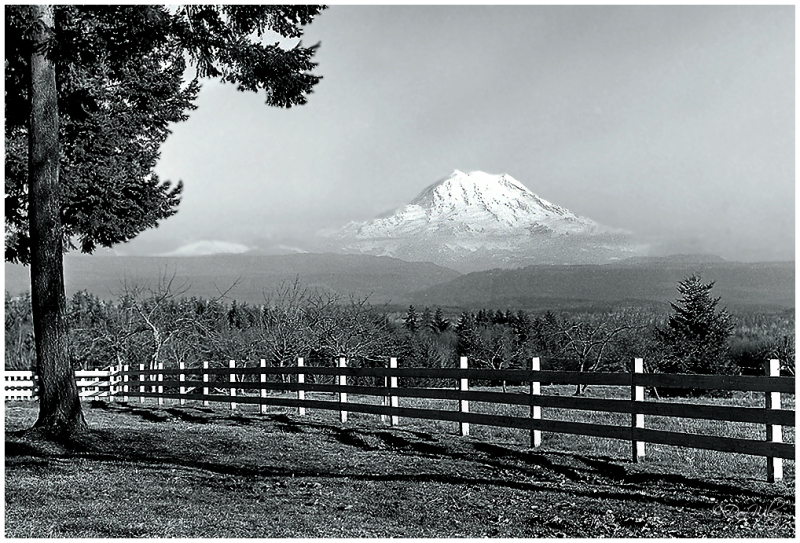 A scanned medium format negative. Mount Rainier is an active composite volcano in Pierce County, Washington, located 54 miles (87 km) southeast of Seattle. It towers over the Cascade Range as the most prominent mountain in the contiguous United States and Cascade Volcanic Arc at 14,411 feet (4,392 m).

(For those who like more background) The mountain and the surrounding area are protected within Mount Rainier National Park. With 26 major glaciers and 35 square miles (91 km2) of permanent snowfields and glaciers, Mount Rainier is the most heavily glaciated peak in the lower 48 states. The summit is topped by two volcanic craters, each over 1,000 feet (300 m) in diameter with the larger east crater overlapping the west crater. Geothermal heat from the volcano keeps areas of both crater rims free of snow and ice, and has formed the world's largest volcanic glacier cave network within the ice-filled craters. A small crater lake about 130 by 30 feet (40 m × 9.1 m) in size and 16 feet (5 m) deep, the highest in North America with a surface elevation of 14,203 feet (4,329 m), occupies the lowest portion of the west crater below more than 100 feet (30 m) of ice and is accessible only via the caves.

Wow, what a composition and what tones!

the tree and the fence complete the composition, fantastic shot

What a beautiful composition Don. The tones give such a nice depth to the image! I like it.

Good day Don,
I like this shot very well. Even the incident light makes the view perfectly. Dear greetings Christel

I'm very happy to see your beautiful photograph ! Mt Rainier made a great impression on me while I was in holidays around Seattle !

A great composition which probably looks at it's best in black and white.

Very nice this particular of the mountain!! compliments!!!

Such a crisp happy vision, the sun is a gift over this image, love it*

fantatic shot. the fence in the foreground is great!

Majestic and amazing capture! Do people take that for granted having that to look at out their windows? I would hope not!!

Great perspective and framing elements. The B&W is a great choice.

Beautiful capture. Excellent framed with the tree and the line of the fence.

This is such an incredibly beautiful view.

A truly stunning exposure Don!
Thanks for the inormation, I enjoy the trivia you include.
The small lake you mention sounds incredible, it is surely a spelunkers "wet" dream to discover such fascinating landmarks below the surface...