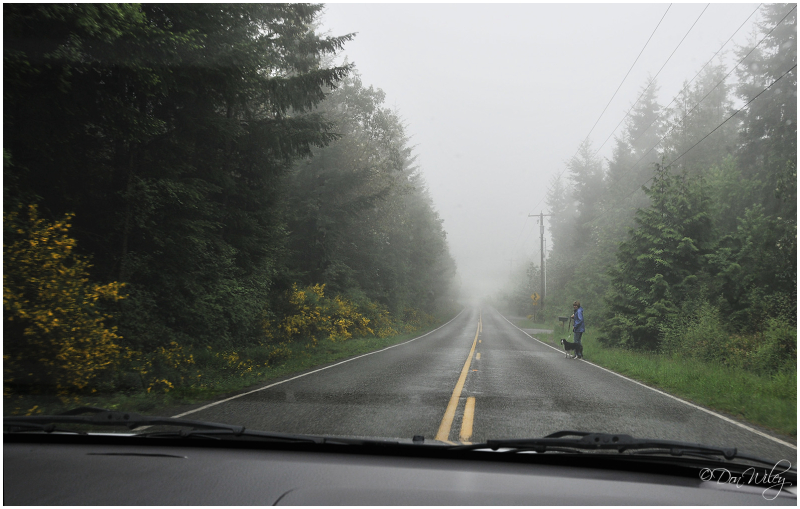 I took this shot because it shows an example of the Scotch Broom (the yellow bushes) growing along the roadway near Port Townsend, Washington. Scotch broom was introduced as a garden ornamental by early settlers of the Pacific Coast. It has spread far beyond the bounds of cultivation and now covers many acres west of the Cascades from British Columbia to California. Wherever it grows, this aggressive plant spreads to form pure stands at the expense of desirable grasses, and young trees. Because it is a threat to native plant species and indirectly to animals that feed on the displaced plants, Scotch broom is a Class B noxious weed in Washington and Oregon.

I love this simple yet strong composition, full of mystery, leading you into the fog...the person with the dog, waiting to cross lends superb scale!

Great feeling here. I like the composition and the fog

The simplicity is so wonderful as it draws you right into the frame. The lines in the road and the mist up ahead are so beautiful right through to the vanishing point.
Love the little splashes of yellow along the way.

Very nice shot....love the fog and the scotch broom stands out wonderfully in the dismal weather.

That stinking stuff! Hate it. Nice shot though with the walker and her dog.

Beautiful! I love your picture of the fog, the road, the person and the dog...

Nice country shot and a good write up Scotch Boom.

Beautiful capture. I really like the atmosphere here! Very nice perspective too.

Interesting info, Don. I didn't realize it was considered noxious and it is definitely prolific, so it stands to reason. I like this misty morning shot.

Nice one, I like the fog and the person on the right.

I like how the road trails off into nothingness beyond the fog. And, of course, the cautious person who sees a guy with a camera to his face as the car approaches :)

love the mood of this shot

this is a wonderful shot, Don. i really enjoy the wet feel and slowly breaking fog.