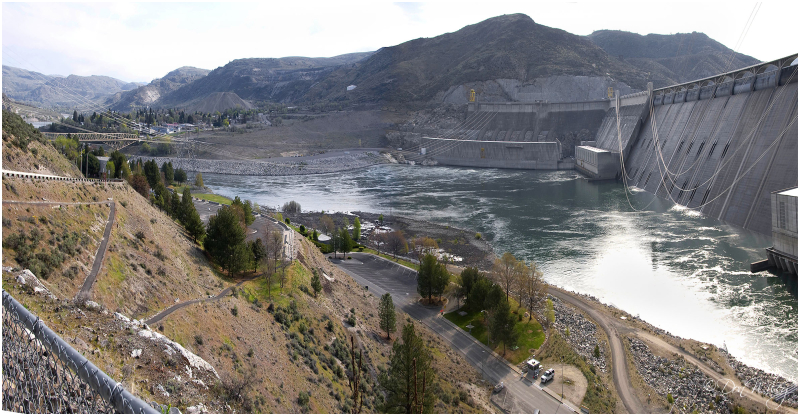 Grand Coulee Dam is a hydroelectric gravity dam on the Columbia River in the U.S. state of Washington. In the United States, it is the largest electric power producing facility and the largest concrete structure. It is the fifth largest producer of hydroelectricity in the world.
For those who want to know more:
The Grand Coulee Dam is almost a mile long at 5223 feet (1586 m). The spillway is 1,650 feet (503 m) wide. At 550 feet (168 m), it is taller than the Great Pyramid of Giza. Its hydraulic height of 380 feet (115 m) is more than twice that of Niagara Falls. After hydroelectric power, the dam's main goal is irrigation of a vast dry area in the center of Washington state. A water distribution network was built using the adjacent coulee to hold the main reservoir now known as Banks Lake. Water is pumped up 280 feet (85 m) from Lake Roosevelt to Banks Lake using twelve 14-foot-wide pipes. Pumped-storage hydroelectricity capability was incorporated into the final six pumps. During low-demand periods, water is pumped into Banks Lake, to be used later during high-demand periods. Water flow is reversed, powering generators as it falls back into Lake Roosevelt. This function is used regularly when irrigation water demand is low and electricity demand is high.

Quite an impressive piece of civil engineering.... I always thought that the Hoover Dam was the big daddy ?

In Holland they have built a huge Storm surge barrier, that holds back the North Sea...!

Excellent photo. Looks very impressive ! i especially like the light on water !

Great shot this picture significant is the great work that you can see in this hydropower plant. Nice shot

Cool shot and information, Don. I was there one summer, years ago, and they did a laser light show about the dam on the side of it. That was impressive.

wow... tnx for the info and nice shot Don

This is an amazing feat of engineering and a great image of it.

impressive! love this shot. that dam makes a cool shot. over in Portland Matt and i got some cool shots of some dams. very cool :)

An imposing and majestic work that goes well to your description, a very good job !