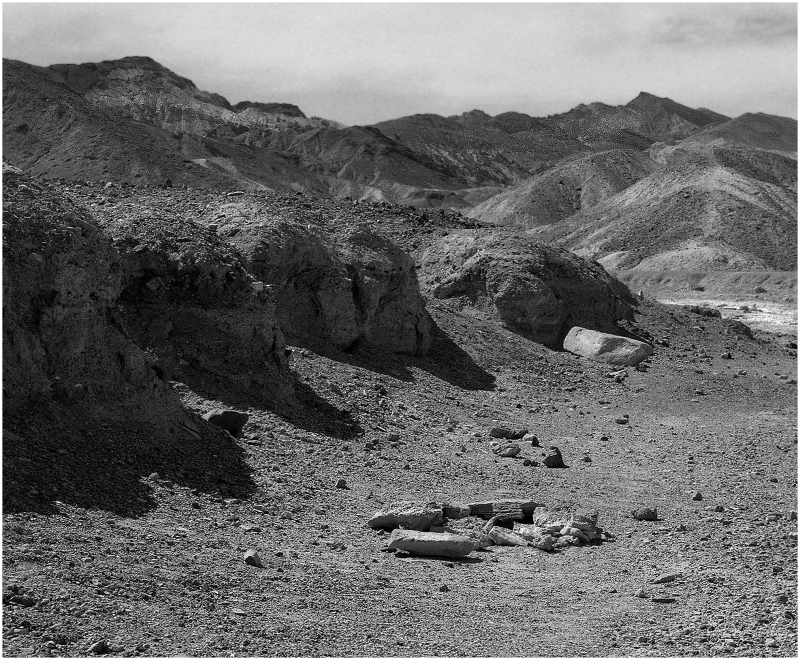 As I recall, this picture was taken near Zabrinski Point in Death Valley National Park. I was struck by the dry river bed ahead and the total absence of plant material. "Death Valley is one of the hottest and driest places in North America due to its lack of surface water. On July 10, 1913, a record 134 °F (56.7 °C) was measured at the Weather Bureau's observation station at Furnace Creek Inn, the highest temperature ever recorded on that continent as of 2007. Daily summer temperatures of 120 °F (49 °C) or greater are common, as well as below freezing nightly temperatures in the winter. It also features the lowest point in North America at Badwater, which is 282 feet (86 m) below sea level." A scanned medium format negative.

Brilliant picture! Looks out of this world!

...beautiful, landscape, composition and rich tones. I just love you b&w photography. It makes me want to dust off my film camera and imitate you !!

So barren...no wonder they named it death valley.

there's more of that fine detail. Furnace Creek and Death Valley: both names really say a lot don't they?! This is a really well done image Don.

a definite favorite. such an eerie landscape. and, i think i could count the rocks in this photo.

I think that the place is made for photographers - great view, tonality and shadows

These B/W shots you are showing us are incredible such detail and this one is no exception those little shadows NICE!

And lots of them. A great shot with a nice range of tones.

So arid and dry. And lonely. Nice processing - the b&w adds to the desolation.

A good game of shadows and light, looks like a lunar landscape . Great work !

Nice depth and hills in the back. Looks exactly as you said, hot!